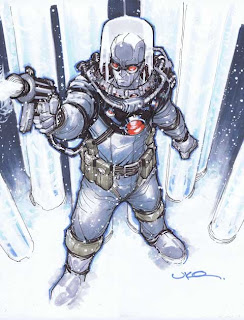 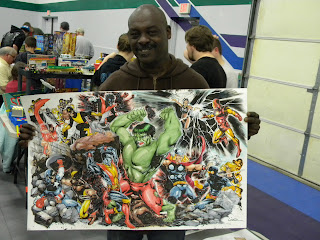 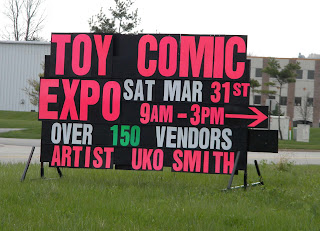 Hey, I'm back with another update from another show that took place in Grand Rapids, Michigan. I was extremely humble to be the Guest of Honor at this show. Again, I had no idea what to expect. But when I drove up to the venue and saw the advertising for the show and seeing my name as well (pretty in pink), i knew I had to put on my gameface. I mean, I was already there with the gameface, but it just took on another level for me. But anyways, I had a tremendous time with this show. There were other talented individuals that I met there as well along with seeing some great vintage toys that I wish I could pick up for nostalgic regions. The organizers treated me great as well as those that stopped by to check out what I was doing or either had to say. I didn't realize there was another Art & Design school there, Kendall. I talked with those that were either attending or looking to attend, so I had to throw my two cents in as to where I teach my comic book classes.
Another great plus was Dan, the owner of the Xmen v. Avengers piece. He came to pick up the piece at the show and was amazed at how it turned out. If you've ever met Dan, he is one of the most gracious people to ever hold a piece of artwork that was made for him. He's a tremendous person and I truly appreciate him over the years since he approached me at a Motor City convention years ago. But anyways, the Mr.Freeze piece was one of the few things I did at the show.
And again, thanks to all those who attended the show to either chat, bought some stuff and to simply watch me work. Appreciate everything.