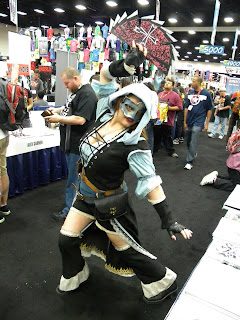 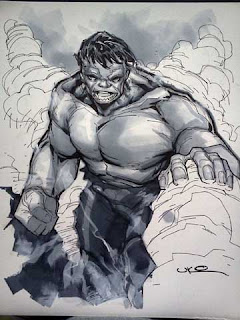 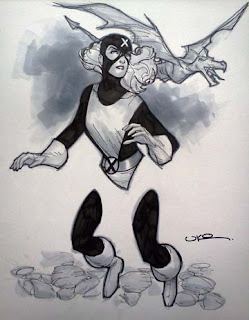 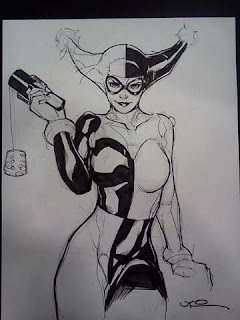 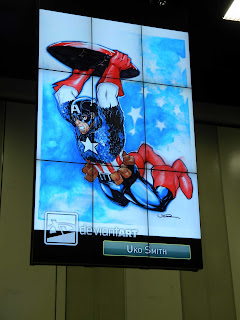 Okay, so with it being my first time at Comic Con, I cannot express how exciting this show was. But first, I wanted to thank the great folks that I've met this past week at Comic Con. I wouldn't have had such a great show without you all whether you were buying or just coming over to have a conversation. It was all engaging and I appreciate you all. It made for a wonderful show and one that I won't forget. Also, I want to thank the folks over at Deviant Art for the sponsorship of Artist Alley. It's one of the best artist alley's i've been a part of. Not only with cushioned seats, but also with carpeted floors and two huge digital displays that showed the artists that were involved with artist alley. I think the displays had to be a good 10' in height that were hung from the ceiling. It was such a busy show that I could not even walk the entire show floor because I knew I had to get back to my table to finish up some con sketches. There were also some hotties in and out of costume, but I could not take pictures of them all, sadly :) but I think I took enough. Plus, it was my first trip out to San Diego and I did not want to leave with such beautiful weather and being around such creative people, made me wish the show was a few hours longer on Sunday. I also displayed two new sketchbooks for the year at the Con, that I will soon place on my website for purchase if you can't make it out to a show I'll be attending. But all in all, I can't wait to go back as I signed up again for next year before I left the convention. I'll post more art and photos later, but for now, here are tidbits from the weekend.
Enjoy,
uko
Posted by uko smith at 1:50:00 PM No comments: 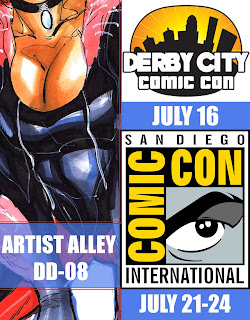 Well, here we go! I have two shows this month. After a weeklong class of helping graders 7-9 on what goes on in producing a comic and or graphic novel, I am now preparing myself for two shows a few days apart. ONe is the Derby City Con, located in Louisville, Ky. I'll be sitting next to friend and writer Wayne Osborne who created the FX series, the first by John Byrne and the second by myself. I grew up loving me some Byrne artwork, amongst others and I was more than happy to follow him. But anyways, this show in Louisville, the inaugural show looks to be quite a good one with a pretty good guest list. It's a one day show and I think just about everything is sold out for it. So, if you're in the area and looking for something to do, stop on by the show and say hello. Would love to see ya!. Now, the other show, for which I am sure needs no introduction is the San Diego Comic Con. This'll be my first in attendance at the show where i'll have a table. I'll be premiering two new sketchbooks along with some pre-con sketches for the week that I'm hoping the people in attendance will like. Will be posting some of the artwork for the two new sketchbooks later in the week, so stay tuned.